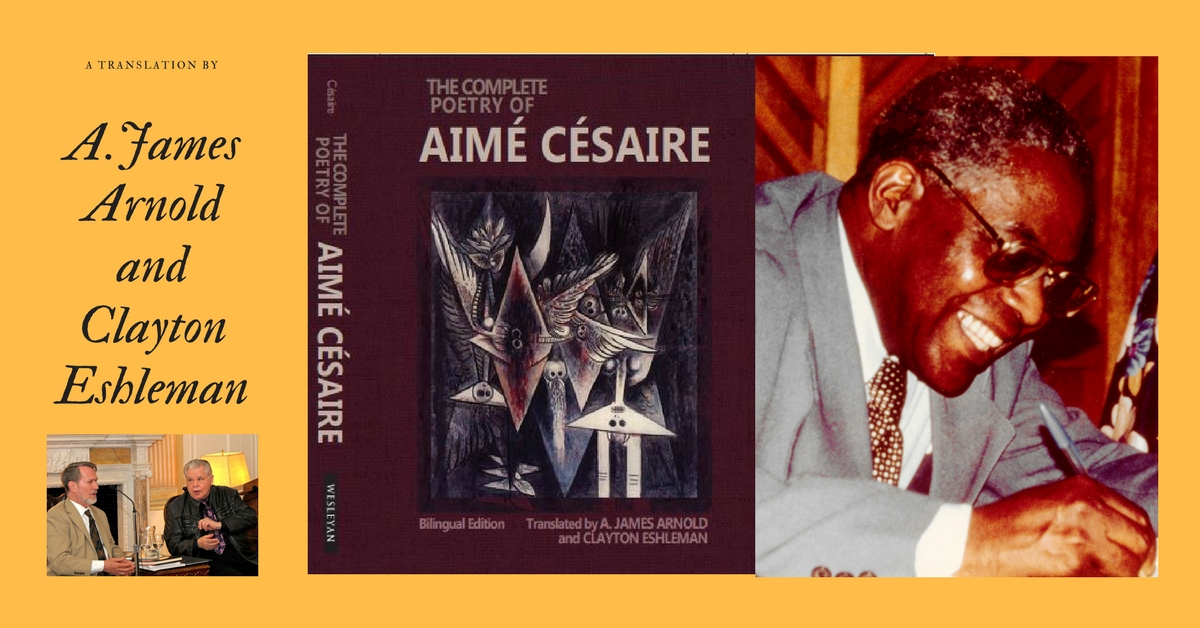 The bilingual edition of The Complete Poetry of Aimé Césaire represented a challenge on several fronts. No commercial publisher would have agreed to publish a 960-page book of poetry that is celebrated for its difficulty. Even among university presses very few would take a chance on such a specialized book. Fortunately the Poetry series of Wesleyan University Press, ably directed by Suzanna Tamminen, has a high profile in this niche market. Other factors contributed to making this prestigious edition possible.

Clayton Eshleman, who has published upwards of a hundred collections, was already a recognized Wesleyan UP poet. When he proposed working on a co-translation with James Arnold, who had co-signed two Césaire translations at the same press (Solar Throat Slashed in 2011 and The Original 1939 Notebook of a Return to the Native Land in 2013), the project gained both traction and gravitas.

University presses survive by plowing profits back into new publishing projects. Without subidies from public agencies (state arts and humanities councils, for instance) and private foundations, small presses could not survive at all. The Complete Poetry of Aimé Césaire received two grants from the Cultural Services of the French embassy: a Hemingway Prize given to Arnold and Eshleman as translators; and an aid for publication from Culturesfrance and the French Ministry of Foreign Affairs. These grants in aid allowed Wesleyan University Press to produce a beautiful book at a very reasonable price ($50.00 hard-bound; $40.00 digital edition). A painting by Césaire’s good friend Wifredo Lam, reproduced on the cover, guaranteed a handsome presentation.

The Complete Poetry of Aimé Césaire promises to jump start a reassessment of Césaire’s importance as a twentieth-century poet. It is the only bilingual edition in any language to date that has used the genetic edition published by CNRS-Éditions in Paris for the Césaire centenary in 2013. It would be difficult to overestimate the importance of this edition of Césaire’s poety. It stripped away the political accretions of the 1950s and early 1960s, which Césaire himself later regretted. For the first time in over half a century the French-speaking world had access to first editions of the collections published in the 1940s. A. J. Arnold was editor-in-chief of the Paris edition; therefore he brought to the Wesleyan UP bilingual project the knowledge of the poetry his team accumulated between 2010 and 2013.

Co-translation is an activity fraught with difficulties. Eshleman brought to the project a deep and intimate knowledge of avant-garde practices in the English-speaking world but also in French and Latin American poetry. (He won a National Book Award for his co-translation of César Vallejo and he has co-translated Antonin Artaud.) Arnold has written on Césaire’s poetics and its relation to historiography, ethnography, and depth psychology since the 1970s. His 1981 book, Modern and Negritude…, has long been a classic in the study of Césaire and his times. Maryse Condé has said of their work: “The scholarship and talent of A. J. Arnold and Clayton Eshleman have once again firmly placed Aimé Césaire on the map of world literature and introduced us to new readings of a master poet.”

The American poet Clayton Eshleman, known for his translations of Antonin Artaud and César Vallejo, and A. James Arnold, who edited the centennial edition of Césaire’s literary works, collaborated on a masterful co-translation. Working from the first editions of the collections published between 1939 and 1950, they have revealed the original structure of Césaire’s celebrated Notebook of a Return to the Native Land (1939), with its spiritual transformation of the colonized self; the explosive optimism undergirded by surrealist techniques in Solar Throat Slashed (1948) ; the interrogation of the West Indies and Africa on the eve of independence in Ferraments (1960) ; and the representation of a reduced and threatened self in i, laminaria… (1982). Finally, in Like a Misunderstanding of Salvation, Césaire recognized the over-reaching ambition of the negritude ideology of his youth.

A succinct bio-biblio and abundant notes on the individual poems will assure this edition’s place on the shelf of every serious student of Caribbean studies, as well as poetry lovers throughout the English-speaking world.

Notes on the translators

Clayton Eshleman is an eminent American poet, author of around a hundred books, and the principal translator into English of Aimé Césaire and Antonin Artaud. In the 1980s he worked with the French poets Michel Deguy and Bernard Bador. Since 2009 he has worked with A. James Arnold on new translations of Césaire.

A. James Arnold began his career in modern French literature as a specialist of Paul Valéry. In the 1960s his readings in surrealist poetry led him to Césaire’s then untranslated Miraculous Weapons. His first Césaire book, Modernism and Negritude…, was published by Harvard University Press in 1981 and has become the standard reference for scholars and students. His work on the Césaire centennial edition of Poésie, Théâtre, Essais et Discours led directly into preparation for The Complete Poetry of Aimé Césaire. His new general study in French, Aimé Césaire : Genèse et transformations d’une poétique is awaiting publication.

Acknowledgment to Prof A. James Arnold and Clayton Eshleman