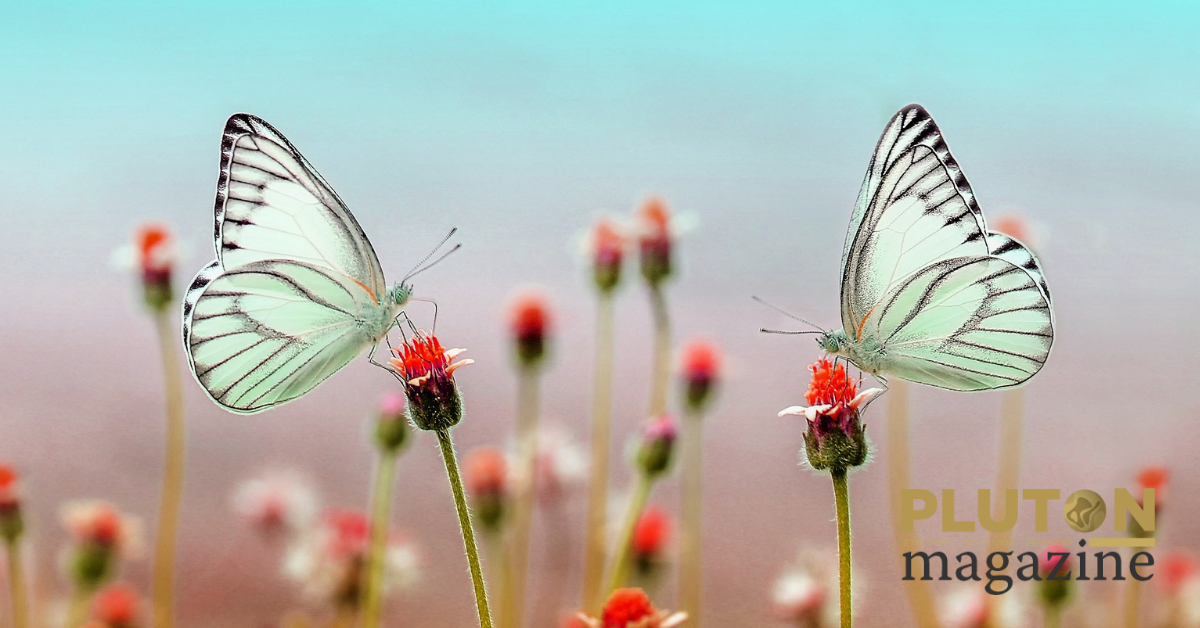 A tale by Dominique LANCASTRE

“I know you are my friend said the candle to the butterfly but please do not fly so close to me.”

Every night the little lonely green butterfly, Greenie, was visiting the candle despite the warning from the black butterfly who knew a lot about candles.

“We cannot be friends with candles” he said. “Fly during the day in the sunlight but never at night”.

He paused and said again.

“You should never fly at night. Never.”

“Don’t listen to him” said Greenie. “He is just an old butterfly who can hardly fly. He is blind and cannot even fly over ten roses during the day” whispered Greenie to the younger ones.

Greenie carried on and said to Bluie , Pinkie, Yellowie, “I am friends with a candle.”

Greenie was telling them how nice it was to fly at night.

“It is so quiet and peaceful, and the light is really beautiful. I will show you one day.” she said.

Greenie was not totally wrong.  Not only was Blackie the black butterfly going blind, but he was also half deaf in his advancing age.

Suddenly, Redie the elderly red butterfly who was hiding behind a large flower came forward and said, “There’s a good girl Greenie. I know what you have been up to and I wish you would listen to your elders.”

“Me?” said Greenie “I have not been doing anything” she added.

“Don’t lie to me Greenie. I overheard what you have been saying to the younger ones and I know about your nightly visits to the candle” said Redie.

Greenie did not like flying during the day as she was often mistaken for a leaf. She was as green as any of the leaves in Butterfly World. Greenie had a twin sister called Whitie. Whitie was as green as Greenie and it was exceedingly difficult to tell the difference between them. Sometimes Whitie pretended to be Greenie and at other times Greenie pretended to be Whitie. She had been named Whitie because she had been so pale at birth.

“So, you have been spying on me, Redie” said Greenie.

“Mind your language young girl” replied Redie. Blackie and I are the oldest butterflies living in Butterfly World and you should pay us due respect”.

“Pay you some respect!” retorted Greenie. “Are you running a kind of dictatorship here in Butterfly World, or have I missed something?” said Greenie.

Redie became redder than a Chili and flew directly into Greenie’s face.

“Now young girl, you will not be leaving Butterfly World under any circumstances. I will make sure of it, or you will get into trouble” said Redie angrily.

Redie then left and started to fly from rose to rose to calm herself down.

A bunch of roses who were listening to the conversation implored Greenie to hush. “Come here! We need to talk to you” they said.

Greenie looked around her. All the butterflies had disappeared to the other side of the field.

Meanwhile, the flowerbed of pink roses had been planted in front of the mansion by Lady Denia Christina which she cherished daily. During the day you could see her, in the garden, wearing a large hat to protect her pale complexion from the sun. Lady Denia had an only child named James.  He was a very gifted young man and every evening when the sun was gently setting, the rays radiating through the tall trees and landing on the roses, J would start playing the piano. Next to the piano stood a little table on which sat a candle that never melted. J never told his parents about this magic candle. It was his secret. Through the big windows the flower bed of pink roses lay like a soft pink carpet.

“We know how to get you into the mansion to be with your friend the candle” they added.

J had noticed Greenie’s presence almost every night as she was flying around the eternal candle. He thought that they were good friends, and felt that he should never disturb them. He pretended not to see them and played with his eyes closed most of the time whenever Greenie was around.

Greenie went closer to the roses and said: “How?”

“At dusk, come to us.  We will hide you and when J lights the candle you can fly to her” they said.

“It is very tempting “ said Greenie

“But what if Redie sees me?” asked Greenie

“She will not. We will keep her busy by opening the larger roses to tempt her.”

“What do I have to do? Tell me.” asked Greenie impatiently.

“Well, we will tell you, but you need to keep it a secret. Never tell anyone about what we are going to reveal” said the roses.

Greenie promised not to tell and asked them to divulge how she might reach her friend the candle, at night.

So, the roses told her.

“In the middle of the flower bed there is one special rose. Come back at dusk and we will introduce you to her”

Greenie was so excited about the news that she remained restless for the whole day. She could not stop flitting from flower to flower, trying to keep busy.

As the sun was going down and the rays were beaming their beautiful colours above the trees, Greenie swiftly approached the roses for the evening meeting. Redie had kept her eye on Greenie all day but she was tired now and had already gone to sleep. She had seen Greenie working nonstop so there was no reason to be suspicious about her.

As soon as the last ray disappeared on the horizon Greenie jumped into the flower bed and was met by a group of roses who took her straight to  Mother Rosy.

Mother Rosy was the eldest of the pink roses living there. She was right in the middle and surrounded by lots of small roses with long spines. Even Lady Dénia could not reach the middle of this flower bed.

“Why do you want to go to the candle? Don’t you know that it is dangerous” enquired Mother Rosy.

“I know it is dangerous but she is my friend and she has never melted. I like listening to the pianist too. He is particularly good” said Greenie.

“Is he?” said Mother Rosy “You are a mere butterfly but what do you know about music?”

“I don’t need to know anything about music. It fills my heart with happiness, and I like the beauty of the candle at night” answered Greenie.

“Yes, that is all I need,” replied Greenie.

Mother Rosy was listening carefully to Greenie and said:

Greenie was so happy and accepted the protection afforded by the power of the roses. Then she flew to the candle and danced around her all night.

The days, weeks and months went by following the same ritual. Greenie would go to Mother Rosy to be covered by the power of the roses.

As Greenie grew accustomed to the ritual she also got rather fed up.

“What is so special about the power of the roses? Why can’t I just fly and see my friend, the candle?” she thought.

So, one day Greenie flew into the room. She settled on the piano, then on Jame’s nose, who continued to play without blinking.

About the author: He is the author of La Véranda (translated in Martinique and Guadeloupe Creole in 2019), Retour à la Grivelière, Une Femme chambardée, Tambours du silence, a poetry book (2019) Le Secret d’Igor is his last book published. He contributes to collective works such as Nouvelles des Mondes Créoles under the direction of Raphael Confiant with authors like Dany Laferrière (Académie de France).