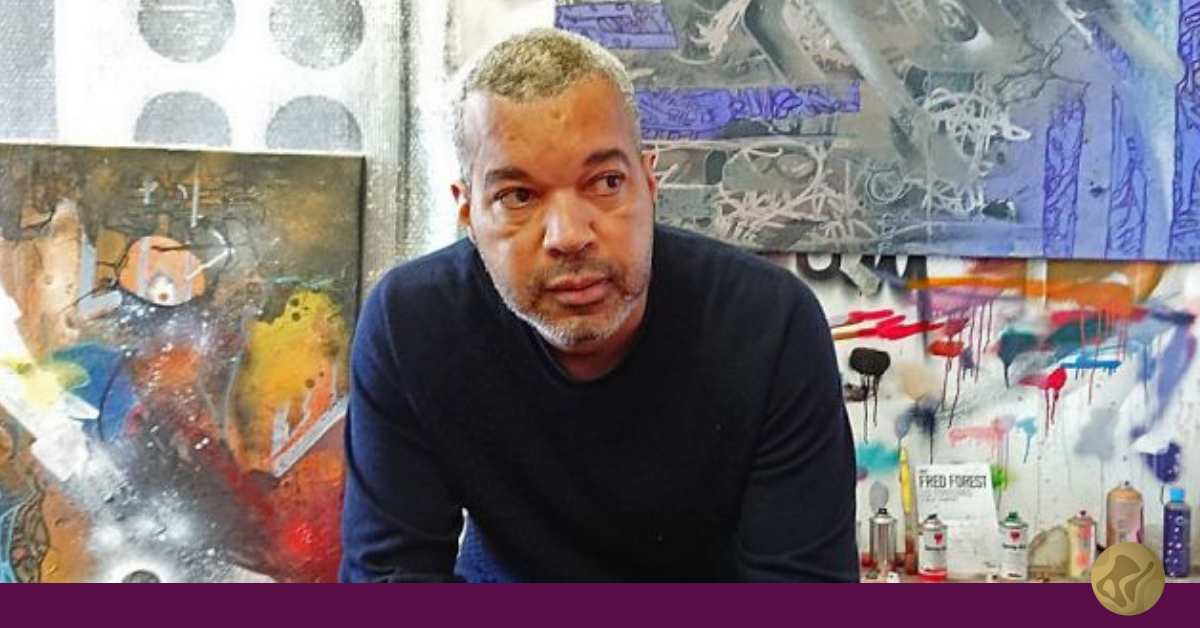 One of the pioneers of French street art and graffiti, Guadeloupean painter Shuck One, opened for us the doors of his workshop in the Paris region. Journey of an atypical and deeply committed artist..

His workshop is located in a former factory near the industrial area of Choisy-le-Roi. The set was first a leather goods in the nineteenth century before becoming a glass factory. Facing the Seine and the railroad tracks, the place has preserved its old-fashioned appearance. Paths are still paved and the walls of the old complex seem to harbor an indefinable memory. A theater has settled there, as well as some other artists’ studios.

On the second floor of one of the buildings, with a view overlooking the river, Shuck One evokes « a place of inspiration and intense creation » . « There is an almost voodoo energy here. And then the place is very well exposed, with a lot of light », he adds. The artist, who lives in Paris, has been renting this space for ten years. « I come here almost seven days a week. It is a place of reflection and design where I am in perpetual creation » . Between trips. Recently, he was still in Venice where he spent ten days as part of the cultural events related to the famous Biennale.

« Take ownership of our history »

Shuck One was born in Pointe-à-Pitre in 1970. His first discoveries of graffiti are made in the streets of this city, in a period of political demands where the separatist activists write slogans on the walls.

« I started thinking about our identity and our struggle to exist », he says. « To our foggy history with France, our brains stuck in a dark fog. I also thought about the history of Africa, of slavery, not to mention our Caribbean and South American environment. There was this desire to reappropriate our history. »

In 1984, Shuck One arrived in Paris. Another universe for this native of Guadeloupe, where he discovered the European hip-hop movement and community. « I also discovered graffiti in another form », he says. « It was another form of identity, with claims, something very urban and political. » In the capital, Shuck One begins graffiti. « I sowed a little everywhere in the city, to leave traces. I had made the metro my territory. » His favorite lines are the lines 2, 9 and 13, among the busiest and crossing all through Paris, which will earn him the title of « King of subway ». It is at this time that he also chooses his pseudonym.

In 1990, he created the association Basalt, a collective of avant-garde Paris graffiti artists, influenced by hip-hop and underground cultures. Under the impetus of Basalt, the French street art will gain its letters of nobility at the international level.

« Our graffiti resonated with the street. We were in a dynamic of social and urban emancipation », recalls Shuck One.

And this dynamic continues to bring its creations, even after the dissolution of Basalt in 1995.

The mid-90s marked an inflection in the career of the Guadeloupean artist. He will develop other techniques and invest in other universes than urban spaces. Still using paint bombs, he mainly works with canvas, but also makes collages, drawings, sculptures and « live » installations. At the same time, he acquires international recognition.

In solo and group exhibitions, Shuck One’s works have been shown throughout most of Europe (Germany, France, Belgium, Italy, the Netherlands, Switzerland, Sweden, etc.) in Martinique, Canada, as well as Morocco and South Africa. His creations are also part of public and private collections. They are found in the permanent collection of the Memorial ACTe in Guadeloupe, the National Contemporary Art Fund, the city of Strasbourg, the French Ministry of Overseas Territories and the Thetis Foundation.

But the artist does not stop there. This great reader of Edouard Glissant, Frantz Fanon, Nelson Mandela, « but also Marcel Proust, Charles Beaudelaire and Condorcet », he says, co-founded in 2018 an association to which he is very fond. « Live Free or Die », that is its name, inherited from the motto of the Jacobins, taken by the Martinique colonel Louis Delgrès who led the insurrection in Guadeloupe against the Bonapartist troops came to restore slavery, is a platform for exchange and transmission around memory and history. Its aim is « to fight racism, to affirm the strength of diversity in the contemporary world, to work for the living together and to build the feeling of a common horizon for all humanity. »

« Through this platform we want to give a central place to children and help them in their personal development », said Shuck One. « Live Free or Die » worked with different institutions such as UNESCO and Sciences Po Paris, among others. In addition, faithful to his commitment to young people, Shuck One was a reference artist for the « Flame of equality » 2019 competition, where he led workshops with three classes and their teachers at the Marcel Lelong school in Sarcelles in the Paris area. The 82 students were laureates of the competition, and got their certificates on May 10 in the Luxembourg Garden from President Emmanuel Macron.

Cover: Shuck One in his workshop in June 2019 © Philippe Triay